To my beloved Grandfather.

You passed away the summer before I was going to start fifth grade. Now I am 38 years old and it’s been so long since then. But I remember you clearly and in detail. I cannot explain how this is happening to me, but I remember our dialogues and our moments even before Ι start going to school. I remember how much you loved me and you took care of me. The walks we went together with Grandma, Mom and Dad.

You were an incredible driver. I remember the summer before I went on first grade, we lived together (you, Grandma, Dad, Mom and me) in Argiroupoli and a neighbor was moving out. The driver of the transport company had parked the truck so close to the entrance of our building that he could not remove it, not even a bit. When you suggested helping him, he looked cynically at you but after trying to remove it several times without any success he let you help him. In front of his stunned eyes (and neighborhoods’) you removed the truck with two maneuvers. When you got out of the truck, you just smiled at him and told him that now he could leave easily. Without a trace of irony, sarcasm or arrogance, while everyone else were giggling and mocking behind his back. That was how you were “pappouka mou” (“my grandpa” that is how I used to call you), a cool, relaxed, with no complexes, wonderful person.

You were a hard worker, reveler, honest, fearless person and you loved the whole world even if they didn’t deserve it. We were hanging out in the kitchen and you were singing to me “Koutalianos” and “Asta ta mallakia sou” (Greek old songs). You were telling me stories from your homeland Mytilini and how beautiful your village, Kalloni, was. You were sitting with dad telling jokes to each other and laughing as if you were father and son. Dad loved you as if you were his real father even if he was your son in law.

But you had a defect. You were smoking too much. Grandmother was nagging at you to quitting smoking. She had a bad feeling. I remember I was going first grade and we were the two of us at home in the living room. As you were walking, you bowed, you fell on your knees and you grabbed your heart. You cried for grandmother “ Nitsa, Nitsa!” and I had stayed there looking at you petrified. I did not understand what was happening. Grandmother came running from the kitchen and she helped you get up. They took you to the hospital. You had a heart attack. But you were strong and overcame it. Your doctors gave you medication and told you to quit smoking. A cardiologist had specifically told you that each cigarette you smoked was a nail in your coffin and you had replied: “Then tell me which would be my penultimate nail in order to quit smoking then. “

Oh, my sweet grandpa. How right this doctor was. Your heart was strong and withstood, but your lungs weren’t. When I was on third grade you were diagnosed with lung cancer. The whole family did its best to save you. We went to all hospitals, all pundits, we were preparing to take you abroad, but the chemotherapy had exhausted you. There could be nothing more done. You were full of cancer and you were unrecognizable. Your form was gone and it had left only a battered corpse with his bones. You were living at home with us and we lived together your torment to the end. Besides, that is what people do for their beloved persons. They share their pain and do whatever they can to alleviate it. I had finished the third grade and it was now summer. I remember you said to grandmother with winge: “Nitsaki mou [My Nitsaki] I did not to listen to you.” and she hugged you and she told you in tears: “Now it’s too late … “. The next day you were gone.

It’s been almost 30 years since then and I remember everything in detail. I was in the kitchen and grandmother came in with red eyes, she looked at me and said quietly with a soft voice: “Your Grandfather is gone”. I started crying and she told me not to cry. I had hanged on to her and we were crying together. Mom was a wreck and dad was trying to be strong for his “girls”. We had been left onour own.

In the summer of 2013 we had grandmother to the hospital and I saw you in my sleep. I hadn’t dreamt of you for years, I don’t remember how many. I dreamt that I was in a hallway of the hospital and I saw grandmother from the open door of a room, lying on a bed and doctors and nurses were taking care of her. I looked to the right of the hallway and I saw you coming towards me happy and healthy as before. You came close to me and I said to you “Grandpa!”, I was happy too. You clasped both of my hands and squeezed them into yours with a small beautiful smile. It was only for a moment but you showed me how satisfied you were with me and I felt you were passing on strength and courage to me. It was only for a moment and then you disappeared from my eyes.

I understood that you were going for grandma. The woman who you loved and she loved you so much that you defied her family that they didn’t want the two of you married and you eloped. I just hope now that she is gone too, you found each other and you are happy together wherever you are. That would be the only fair thing in so much injustice that surrounds us.

I love you “pappouka mou”, 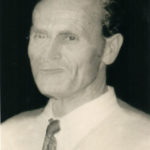 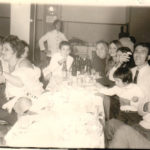 To the mother I never met