My cousin Lucy wanted to adopt a cat so we went to a shelter.

As I was passing by the cages with the cats, I saw a blanket in a corner with a cat sitting on it. It was a little black cat covered in blood. He was meowing sadly. I asked for details about the cat. They told me that a car had hit him and he was seriously injured. His jaw was broken and he had some nasty deep wounds. He was in pain and scared to death. However, he allowed me to caress him. I felt sorry for him. Meanwhile, my cousin had chosen a little grey kitten, she adopted it and we left the shelter. As I was driving, the picture of the black cat was twirling in my mind. I turned left and went back to the shelter. I adopted him.

For the following 4 weeks I became his nurse. I was feeding him milk with a syringe and I was cleaning his wounds. A strong bond was created between us and we became inseparablefriends.

After 2 months, he had recovered completely from his injuries.

He became an adult, sociable, clever cat. He used to purr every time I was close to him. I used to take him with me at work. He was the mascot of the store! All of my customers liked him.

The best moments were when we were lying down on the sofa at nights. I miss our games. I remember I was pretending that I was going to attack him and we were playing wrestling. It was so fun!

In my bedroom there was a dreamcatcher with feathers. He loved to play with it. Many times I was waking up during night and there he was playing with the dreamcatcher! I was watching him until I was falling asleep again.

I miss him so much… I wish he was alive and I would never complain again about cleaning the cat litter.

After 12 beautiful years, he was an elderly cat. He had lost half of his vision and he was walking with difficulty. One day he got a cold. I thought it was nothing important. But…. The medicines didn’t work. The vet had warned me to be prepared because Blacky had a weak immune system. After one week, the diagnosis was pneumonia. We tried everything but we failed.

He knew he was dying. I could see it in his eyes and I couldn’t bear the thought that I was losing him.

The last afternoon, I had him in my arms, he looked me in the eyes as if he was saying goodbye, he closed his beautiful eyes and he left ….

I will always love you! 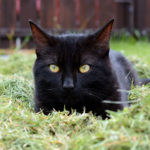 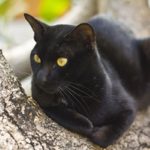